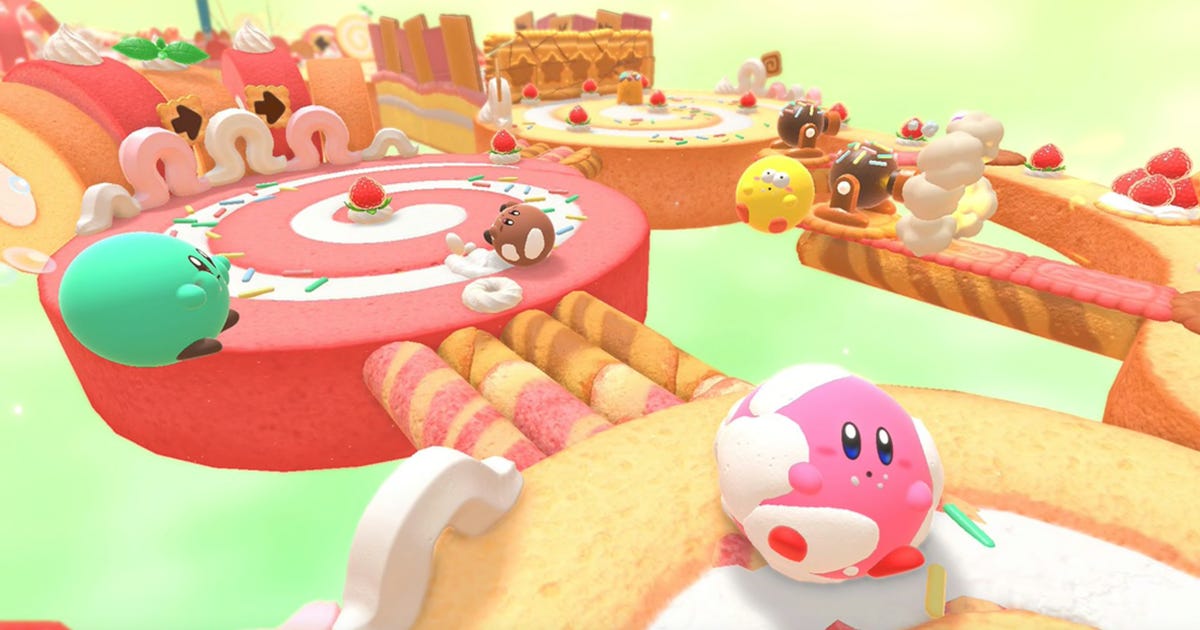 Kirby may be best known for his sweet platforming adventures, but the voracious puffball has branched out into many other genres over the years, from pinball and puzzles to mini-golf. Kirby’s Dream Buffetwhich launched on Nintendo Switch on August 17, immerses Kirby in a food-themed party game, and the result is delicious – if a bit insignificant.

Dream Buffet’s main course, so to speak, is the “Grand Prix Gourmet”, a four-round competition consisting of races, mini-games and a battle royale, with the ultimate goal being to gobble up the most strawberries. . The first and third rounds are races through an obstacle course made of food. You’ll have to carefully navigate sponge cake tracks, shortbread platforms, egg yolk trampolines and other delicious hazards on your way to the finish line, where three mountains of strawberry shortcakes await. .

Naturally, the goal here is to reach the finish before the other players. Coming in first means you can help yourself to the biggest serving of shortcake, virtually ensuring you’re comfortably ahead before the next lap. However, speed isn’t the only thing you need to worry about. Strawberries and other fruits are scattered throughout the course, so you’ll need to collect as many as you can on the way to the goal while trying to get ahead of your opponents.

Adding another layer to the races are the various power-ups you can acquire. Like in Mario Kart, these are stored in item boxes scattered liberally around the stage, and they grant Kirby a different food-themed copy ability when collected. Tornado, for example, creates a vortex that attracts nearby strawberries, while Jelly allows you to run past walls. These powers can also be wielded offensively. Use your copy ability to bump into another player and you can send them drifting, costing them strawberries and, more preciously, time. This turns every race into a frantic struggle for survival.

The more strawberries you eat during the Grand Prix, the bigger your Kirby will grow. Not only does this affect your position in the leaderboard (the heaviest Kirby at the end wins), but it also gives you a greater advantage over other players. Your oversized Kirby will be much harder to knock off platforms, literally allowing you to throw your weight around. However, all that weight also comes with a downside, as you’ll struggle to climb back up safely if you fall.

Between the two races is a competitive mini-game. These vary by Grand Prix; one involves jumping into cups that appear around the stage and eating the strawberries inside before other players, while another asks you to smash boxes to collect strawberries. Unlike Dream Buffet’s other game types, these minigames are short and rudimentary, but they can still get quite hectic, serving as a fun respite between rounds.

To top off the Grand Prix, a free-for-all battle royale takes place on a floating stage. The objective here is to knock enemies out of the arena while eating strawberries, which will rain down continuously throughout the round. Power-ups will also appear periodically, and they’re even more powerful here, guaranteeing all but a player’s elimination if you log in. As before, the penalty for falling off the stage is the loss of Strawberries, which means the tides can change drastically during battle royale.

With four friends (the game supports online and local multiplayer), Gourmet Grand Prix is ​​a hectic time. Unfortunately, there isn’t much else to do in Dream Buffet, especially for solo players. The game offers the option to play races and mini-games individually or against robots, and the items you unlock as you play and level up can be used to customize a cake in the central area and equip your Kirby in different headgear. (Mine is currently rocking a good burger). Beyond that, however, there are no other game modes, so your enjoyment will largely depend on how often you have someone to play with.

Like the candies Kirby races on, Dream Buffet is a sweet treat – an airy party game that’s fun at gatherings, but ultimately light on substance. With a low price of $15, however, Dream Buffet is still easy to recommend.