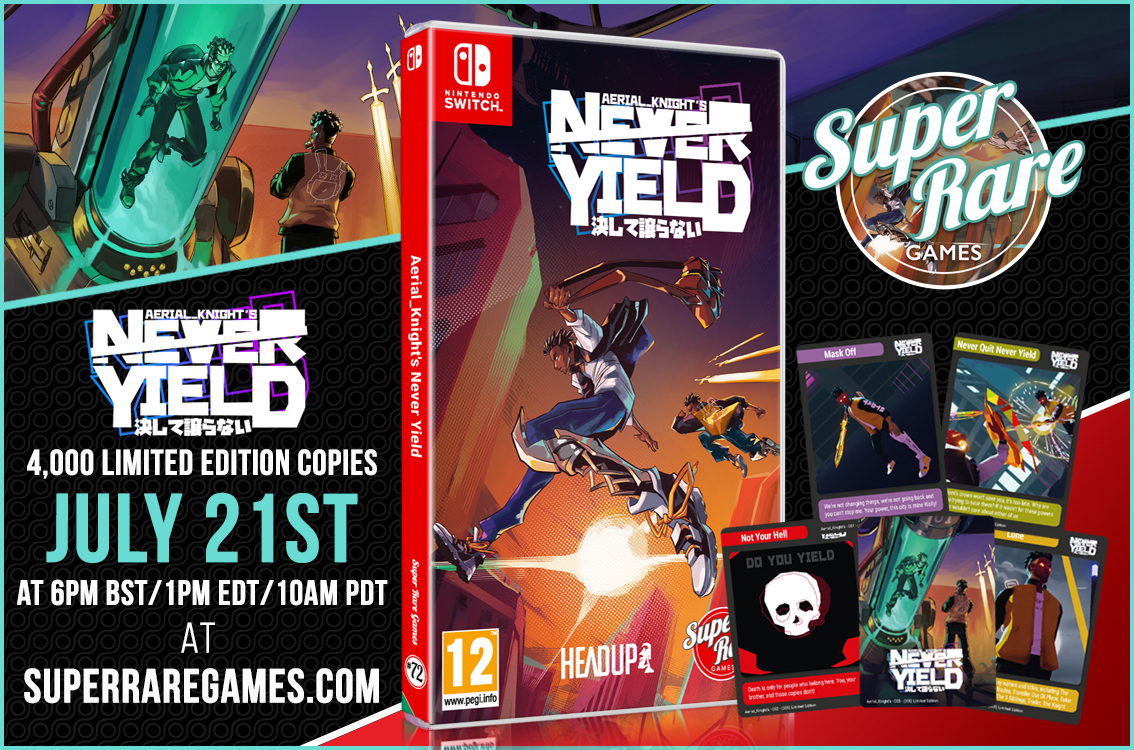 Super Rare Games is getting ever closer to its 75th physical release. For their 72nd release, they have teamed up with publisher Headup Games and individual development team Aerial_Knight to bring Aerial_Knight’s Never Yield to the physical world.

The classic 3D side-scroller/endless runner, which has a free demo available on the Nintendo eShop, will only be available in limited quantities. This particular physical edition will be set at 4,000 copies.

Survive a futuristic Tokyo-style Detroit in this 3D runner that tells the story of Wally who discovered the evidence that can change his city forever. Explore a game world with a dope-tastic soundtrack featuring the authentic sounds of Detroit Artist.

STORY
Take on the role of Wally. A mysterious character who has recovered what was taken from him. I hope you are fast enough to outrun your enemies. Expose the truth and try to uncover the mystery of what happened to them. With an average length of an action movie (about an hour and a half in Normal), the first part of this action-packed adventure can be enjoyed in an afternoon. Then you can improve your score.

GAME
Aerial_Knight’s Never Yield is a 3D side scroller that plays much like a classic endless runner. The game has an interesting story that keeps the players always moving. Run, Jump, Slide or “Dash” for acrobatic variants leading to doping combinations and avoid the challenges that await you. Aerial_Knight’s Never Yield is designed for gamers who like to speed up games while being an experience that casual gamers will also enjoy.

SOUNDTRACK
This Never Yield soundtrack from Aerial_Knight is produced by “Danime-Sama”, an artist from Detroit with vocals from artists around the world.

DEV NOTE
This project started as a simple passion project that I started on my own to create something familiar but new for this generation of gamers while highlighting aspects of an often overlooked culture. I really hope you enjoy the game once released and follow my journey to create new and interesting games. – Aerial_Knight

Just like previous Super Rare Games physical releases, Aerial_Knight’s version of Never Yield will include the following: the current version of the game on a physical Nintendo Switch cart (including “Da Update”), a full-color manual, the case with a reversible button cover, an exclusive sticker and a pack of 3 trading cards for $34.31. Orders will be limited to two per person and for those who want to try and collect the full set of 5 cards plus the 1 foil variant, additional packs of 3 trading cards will also be on sale for $2.96 each (limit of 5 per person).

Sales open Thursday, July 21, 2022 at 10 a.m. PT | 1pm ET at Super Rare Games and orders will ship shortly. Once the 4,000 copies are sold, that’s it! You’ll need to get Aerial_Knight’s Never Yield from the Nintendo eShop or find a physical copy on the second-hand market.