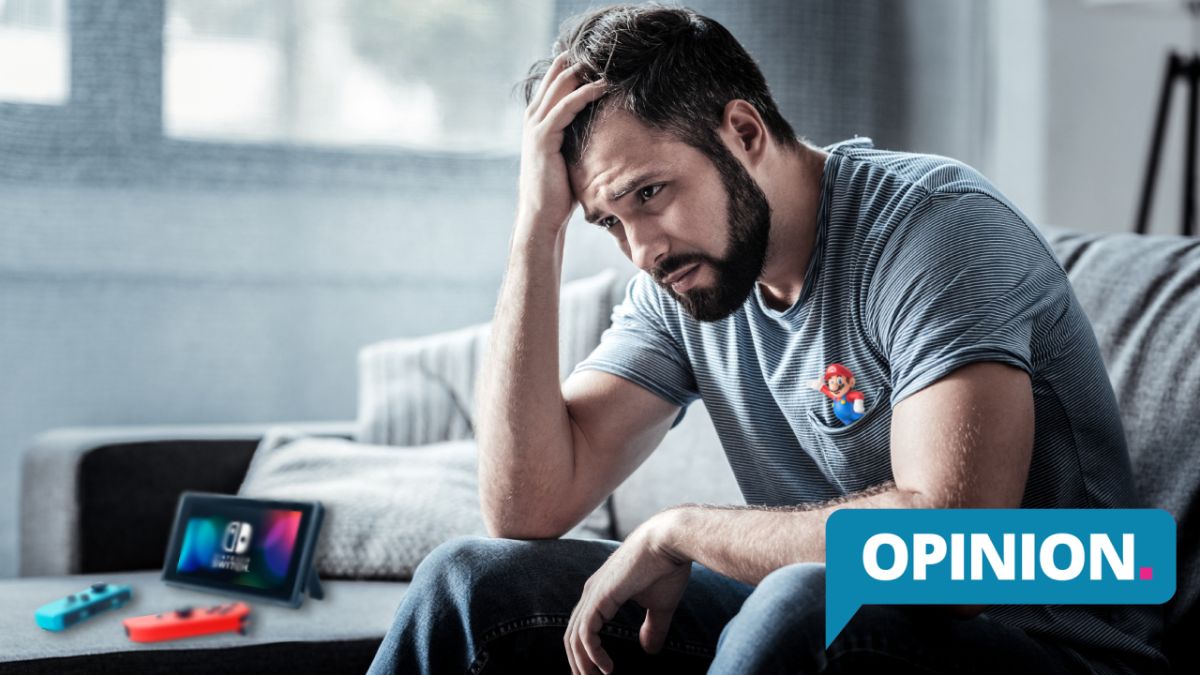 I want to love my Nintendo Switch again, but it’s not easy

I don’t really believe in love at first sight – especially when it comes to inanimate objects. But when the Nintendo Switch was revealed, my attraction can only be called instantaneous.

“From the moment we met you could see that I was filled with desire.” These were the opening lyrics for the catchy White Denim track that accompanied the insanely smooth Switch trailer, and they couldn’t have been more appropriate.

Nintendo’s trailer for its eight-generation console successfully hammered the concept of a hybrid console with aplomb – aside from the impromptu unrealistic rooftop parties – and seemed to erase all of the Wii U’s many mistakes.

Unlike the hefty Wii U, which to this day would probably still bamboozle the average consumer on what it is Actually supposed to be, the Switch’s appeal was immediately evident. It was a console that you could play on TV, but could also be taken on the go, without any restrictions. Unbelievable.

Best of all, the console was also designed for local multiplayer from the get-go. Detach the ingenious Switch Joy-Con controllers and you suddenly fight on Mario Kart 8 Deluxe while waiting for a plane to France which has been inexplicably delayed. One of you shouts a curse, the other responds the same, and then you both look up to see a disapproving priest looking at you with all the â€œholier than youâ€ energy they can muster. Unbelievable.

Sadly, despite a glorious honeymoon period with the Switch which saw me spend an exorbitant amount of time in Mario Kart 8 Deluxe, Breath of the Wild, Splatoon 2, Super Mario Odyssey, Overcooked !, ARMS, and indie gems like Hollow Knight, my love for the system has declined dramatically in recent years.

It’s hard to pinpoint exactly when my feelings changed, but I certainly became oblivious to the Switch’s initial appeal, most of which was due to Nintendo’s own making. The Switch also now has to compete for my time and attention with the PS5 and Xbox Series X, both of which have a habit of exposing their flaws.

So what’s stopping me from kissing my Switch with open arms again?

When you’re afraid of playing a console for fear of breaking it, you know something’s wrong. I now see the Switch’s fragile Joy-Con as a time bomb, ready to implode at any moment. The frustrating reliability issues with Joy-Con controllers are now well known, and that means every gaming session could lead to the development of the dreaded Joy-Con drift by my controllers.

It’s shocking that Nintendo hasn’t tackled the Joy-Con drift yet, and that means the little Switch gamepads that brought me so much … well, the joy, never felt also fragile in my hands.

The Nintendo Switch Pro controller isn’t much better either. While it’s not likely to break anytime soon, it comes with the worst D-Pad in Nintendo’s illustrious history, which makes playing Tetris Puyo Puyo a painful experience. Compare Nintendo’s pads to the delicious PS5 DualSense and the ergonomic Xbox Series X controller, and it already looks like a big step backwards.

I love to play with my friends, but unfortunately Nintendo Switch is a lonely online experience. It’s as if Nintendo’s online system is somehow frozen in time, despite the company having all the resources to fix it.

It’s hard to believe, but even though the Switch launched in 2017, you still can’t message your friends, start group chats, or do anything social remotely on the Nintendo console. other than sharing screenshots on the internet. He’s still using friendly codes for heaven’s sake.

Yes, Nintendo has released a companion app online, but there is no support for it. In fact, it recently lost some functionality, and whenever I’ve used it with friends, it’s a noticeably poor alternative to services like Discord or even Skype.

I’m tired of having to jump through hoops just to play weird games with friends on Switch, and now that it’s a paid service – cheap as it is – consumers deserve more. To make matters worse, the Wii U had a more comprehensive online feature set with online video calling and Miiverse.

Nintendo’s proprietary line also started to leave me rather uninspired. And that’s a big concern considering that I tend to only buy Nintendo consoles for its exclusive IP.

I love Mario as much as the next person (probably more), but seeing the usual wave of sports games, half-baked compilations and retro remixes come back for the umpteenth time with a price tag has started to irritate me.

The fact that I had played the majority of Switch’s biggest games years ago on the Wii U didn’t help, which I consider a slap in the face. But when did Nintendo announce that Super Mario 3D All-Stars would be a scheduled release? Well, it’s hard not to feel like the company isn’t just greedy and capitalizes on fan nostalgia.

I’m still incredibly excited for Breath of the Wild 2, of course, but Nintendo needs to start taking more risks and creating new intellectual property like it did with Splatoon, ARMS, and Ring Fit Adventure. I’m not going to buy another remaster, remake, or reissue. (However, drop a Mario Kart 8 Deluxe DLC and we have a deal.)

One of the biggest issues with Nintendo’s console release cycle, and its decision to no longer compete with Sony and Microsoft, is that its hardware tends to take advantage of a few years when things feel “pretty good” from a performance and visual point of view.

Compared to the PS4 and Xbox One, the Switch has held up rather well, offering something new and exciting that has led thousands of people to request â€œSwitch portsâ€. Now, however, compared to the PS5, Xbox Series X | S, and a half-decent PC version, the Switch feels sluggish, underpowered, and its games can seem – to put it mildly – downright ugly.

While I would never expect Nintendo to release a machine capable of 4K / 120Hz, the return to face resolutions as low as 540p and frame rates that tend to hover precariously below. the target of 30 frames per second, is shocking to say the least. The Nintendo Switch OLED, as beautiful as its new seven-inch screen may be, won’t change that either.

With no Switch Pro on the horizon, this is a situation that many gamers will have to put up with until the Nintendo Switch 2 arrives, and it’s something that’s hard to ignore every time I return. play on the Nintendo console.

Demolition of the Game Pass

Part of the last wedge that has been erected between me and my Switch is due to competition, especially Xbox Game Pass Ultimate. I used to love playing indie on Switch, but it’s hard to afford the asking price for the latest and greatest indie when Microsoft’s subscription service has regularly provided several for free, and often at launch.

Example: Octopath Traveler. While not an indie game on its own, thanks to a combination of TV play, Xbox Cloud Gaming, and Xbox remote play, I managed to complete a game that took no less than 70 hours. And thanks to Xbox Game Pass, it was free on day one, runs at 4K / 60fps on Microsoft’s machine. Octopath Traveler is still $ 59.99 / Â£ 49.99 on the Nintendo Switch eShop.

Fortunately, there is one thing that guarantees that I won’t turn my back on Nintendo Switch for good, and that is the possibility that Nintendo is delivering another great title. I might be feeling some serious Nintendo fatigue right now – and I’m feeling quite disillusioned with some of the company’s archaic decisions (please can we add a success system someday? ) – but that could all change if Metroid Dread, PokÃ©mon Legends Arceus, or Breath of the Wild 2 deliver the kinds of unforgettable experiences Nintendo is famous for. (And yes, I am aware that this is not a new IP address.)

I’ll still have to look past the technical limitations of the hardware and QA issues with gritted teeth, but at least there’s still hope for me and my Switch.