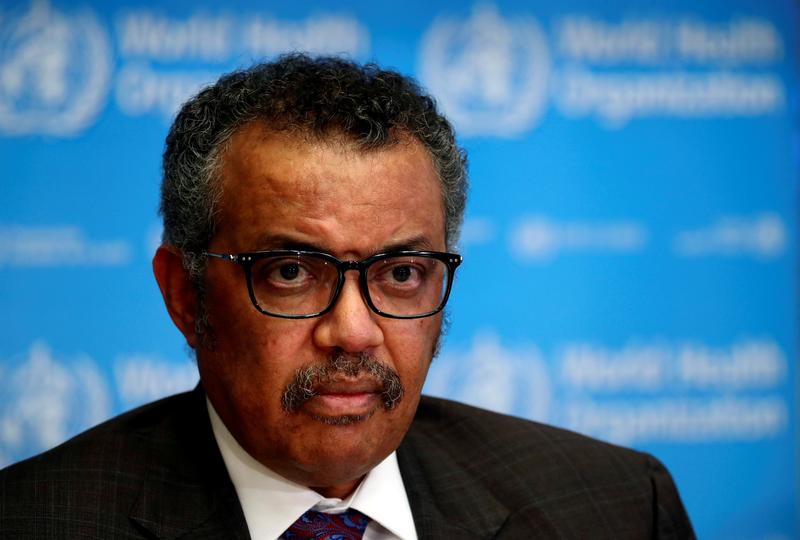 GENEVA (Reuters) – The head of the World Health Organization on Wednesday expressed deep concern over the rapidly escalating and global spread of COVID-19 cases of the novel coronavirus, which has now reached 205 countries and territories .

WHO Director-General Tedros Adhanom Ghebreyesus said his agency, the World Bank and the International Monetary Fund support debt relief to help developing countries cope with the social and economic consequences of the pandemic. .

“Over the past five weeks, there has been near exponential growth in the number of new cases and the number of deaths has more than doubled in the past week,” Tedros said during a virtual press conference at the headquarters. organization in Geneva.

“In the next few days we will reach 1 million confirmed cases and 50,000 deaths worldwide,” he said.

China, where the coronavirus outbreak first emerged in December, reported a decline in new infections on Wednesday and revealed the number of asymptomatic cases for the first time, which could complicate reading trends in the epidemic.

Asked about the distinction, Dr Maria van Kerkhove, a WHO epidemiologist who was part of an international team that visited China in February, said the WHO definition includes laboratory-confirmed cases” regardless of the development of symptoms.

“From the data that we’ve seen from China in particular, we know that individuals who are identified, who are listed as asymptomatic, about 75% of them actually develop symptoms,” he said. she said, describing them as having been in a “pre-symptomatic phase.” The novel coronavirus causes the respiratory disease COVID-19.

The outbreak continues to be driven by people showing signs of illness, including fever and cough, but it is important that the WHO captures this “full spectrum of illness”, she said. added.

“Many developing countries will struggle to implement social protection programs of this nature,” he said.

“For these countries, debt relief is essential to enable them to take care of their people and avoid economic collapse. This is a call from the WHO, the World Bank and the IMF – debt relief for developing countries,” he said.

“What we’re proposing with the World Bank and the IMF is an accelerated process to support countries so that their economies don’t go into crisis and their communities don’t really go into crisis,” he said.